What Should You Do with Your Old Electronics? 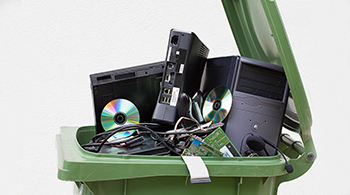 Americans rely on their gadgets now more than ever. A new iPhone comes out every year and those who want to be the owner of the latest, greatest smartphone are going to upgrade every year. New iPads and Apple TVs are also frequently updated, phasing out the old. Apple products are only a fraction of the electronics that are phased out every day. So, what happens to all the old electronics?

According to estimates from the EPA, in 2013 electronics in landfills, referred to E-waste, accounted for more than 3 million tons of materials. California was the first state, in 2003, to pass an E-waste law that pushed recycling of used electronics. Maine followed suite in 2004, requiring television and computer monitor manufacturers to divert their product from landfills while also picking up the tab for their disposal. Many other states have followed examples set by California and Maine, but there is still a need for more focus on recycling e-waste.

If the environmental impact of recycling electronics doesn’t motivate you, perhaps this will: Americans toss about 130 million cellphones away every year.

One reason electronics deserve to be recycled is that they often contain toxic components, which when placed in landfills can leach into the ground. With only 27 percent of E-waste being recycled and with sales of electronics increasing year after year, it’s become prime time for electronics sellers to do something about the waste. Best Buy, an electronics and appliance retailer, which has revenues of around $40 billion a year, has stepped up to make recycling easier.

Best Buy will recycle everything from televisions and video equipment to cell phones, radios, appliances, batteries and camcorders. The company has a goal of collecting two billion pounds of E-waste by 2020.

If the environmental impact of recycling electronics doesn’t motivate you, perhaps this will: Americans toss about 130 million cellphones away every year. For every one million phones, we are throwing away 35,000 pounds of copper, 700 pounds of silver, 75 pounds of gold, and more than 30 pounds of palladium, all of which could be recovered if recycled.

Organizing the recycling of old electronics

What can the average consumer do to help fight the loss? Most homeowners are thinking about spring cleaning at this time of year, which would be a good time to consider taking stock of old electronics and recycling them. As you organize and de-clutter your home, you’re going to likely come across some old electronics. Check with your local electronics retailers and see what they have to offer – some might even come and pick up your old equipment.

You can also consider donating these items to local schools or nonprofit organizations that can refurbish and find new homes for them. Just be sure to wipe your hard drive if you’re donating an old computer.

In some cases you can make money recycling your old electronics. For instance, Apple allows you trade in your old iPhone (some models) in return for a discount on new models. You can also sell your old iPhone to a number of resellers, like Gazelle, Usell, Glyde, and many others.

Have questions about recycling and waste removal? Contact A City Suburban Service, Inc. We offer reliable, same day service and can answer questions you have about old electronics you want to get rid of. Call us today.