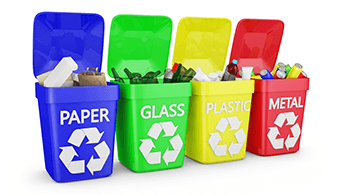 Most can agree that recycling programs are a positive step to a healthier environment. Unfortunately, there is a multitude of disinformation about recycling that circulates the WebSphere. Let’s tackle 10 myths that need debunking:

1) Recycling programs got there start in an effort to reduce waste.

A survey in the mid-1990s revealed that Americans thought trash was the nation’s top environmental problem, and nearly 80 percent of those surveyed said recycling could be a way out of the problem. This myth/belief system rose out of EPA regulations in the 1980s that caused a shift in the waste disposal industry, which began moving to larger landfills, thus causing the number of smaller landfills to go out of business. While the number of landfills might have dropped, the amount of landfill capacity certainly didn’t.

Sure, there are costs, both environmentally and economically, that impact recycling efforts related to transporting materials from the curb to recycling plants. However, it’s really a fraction of the energy it takes to turn those recyclables into something usable. For instance, to manufacture products from a ton of recyclables takes 10.4 Btu. Collecting, hauling and processing a ton of the same materials only adds up to .9 million Btu.

Many recyclables that are easy to process are currently being thrown out, including 73 percent of glass containers

The fact is that many municipalities are locked into long-term contracts that include rather high tipping fees, which means they’re actually paying for their recycling program rather having it work in the favor in the form of revenues.

4) Recyclable plastics end up in the garbage.

Sorting plastics is a tough task, which is why this myth has been proven to be fact in some cases. However, actual recycled plastics aren’t going to the landfill – it’s only the plastics that aren’t accepted by recycling companies that are. San Francisco is actually pioneering a program to accept all rigid plastics using optical sorters to differentiate materials.

The amount of collected material remains the same, it’s just that it has to be sorted and separated.

6) We have millions of acres of landfill space, so recycling isn’t important.

No, space isn’t necessarily an issue, but reduced energy consumption is. Recycling conserves natural resources and can help reduce pollution and greenhouse gasses.

8) Americans are already recycling as much as possible.

The EPA set a goal of 35 percent, and some communities are already recycling at 50 percent. But the national average is only 28 percent. Many recyclables that are easy to process are currently being thrown out, including 73 percent of glass containers.

9) Only white paper can be recycled.

Any type of paper, from the kind used in magazines or newspapers, to post-its to cardboard and colored paper can be recycled. The only restrictions are related to the thermal paper used in old fax machines and paper that has been stained by food products.

10) Recycling bins are ugly and don’t fit the aesthetic of most neighborhoods.

Are the bins really that much more of an eyesore than your everyday trash bin? In fact, recycling bins come in all shapes, colors and sizes. Choose one that fits your idea of good aesthetics.

Need help collecting recyclables? Contact A City Suburban Services, Inc. We’ve got dumpsters of all sizes for residential and commercial use.